The GL.iNet GL-AR750 router has Gigabit WiFi, 2 100mbps ETH-ports and 0 USB-ports. It has a total combined WiFi throughput of 750 Mpbs.
It is also known as the GL.iNet 750M Travel AC Router.It also supports custom firmwares like: OpenWrt, LEDE Project

If your GL-AR750 router is not working as it should, dropping connections or not being responsive, you should first do a reset of the router to see if the problems persist. Other scenarios where you might want to reset your router is if you've forgotten the password or misconfigured it and can't get access anymore.
Your can reset your GL.iNet GL-AR750 in the following way(s):

There are no specific instructions for this model yet, but you can always do the 30-30-30 reset as follows:

This process usually works for resetting any router to it's factory setting.

Note: It is worth reading more about how to reset routers with the 30 30 30 reset and what the risks and considerations are when resetting your router this way, instead of just rebooting it.

If you have performed a reset of your GL-AR750 device or not changed the defaults, you should be able to access it with the following settings:

Staying up to date with the latest firmware is a good idea to keep your router even more secure from various security flaws.
If you want to squeeze a little bit of extra functionality out of your router, consider flashing an open-source firmware like dd-wrt, openWRT or LEDE. Flashing a custom ROM can greatly increase the stability and functionality of your old router.
Following are the firmwares that we have identified existing for the GL.iNet GL-AR750:

Flashing OpenWrt on the GL.iNet GL-AR750

The GL.iNet GL-AR750 is supported by OpenWrt according to their Table of Hardware. So flashing OpenWrt onto it should be quite straigthforward.
We couldn't find any specific instructions for flashin OpenWrt on the GL.iNet GL-AR750, but since it's listed in their Table of Hardware as supported, you can head over to the OpenWrt install instructions and read on there.
Note: Flashing custom firmwares is always on you're on own risk. Make sure to read OpenWrt's wikis to understand the risks and how to proceed if something goes wrong.

Flashing LEDE Project on the GL-AR750

The GL.iNet GL-AR750 is also supported by the LEDE Project.
To install LEDE aquire the correct firmware from their Firmware downloads page and then follow the instructions on their Quick Start Guide
Note: Make sure to read the LEDE wikis carefully before flashing. 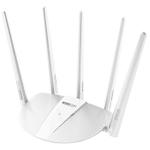